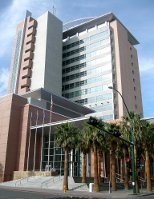 What you need to know about the Las Vegas Justice Court

Clark County, just like other counties in Nevada has a justice court system. The County is divided into townships and each township has its own justice court. Each justice court is presided over by one or more justice of the peace, or judge.

The justice court judges are elected and normally serve a four-year term. The justice courts have jurisdiction over misdemeanor criminal cases and civil cases where the amount in dispute is less than $10,000.00. The Las Vegas Justice Court normally deals with cases such as:

The justice court judges also preside over the preliminary hearings in felony cases. There are several justice courts in Clark County. Each one of them is governed by the same laws that apply to the rest of Nevada’s judicial system.

The sole purpose of the justice court is delivering justice on cases that are qualified to be placed in the categories named above. In order to do this, the court normally holds hearings where both sides of the case are presented. For instance, if you violated a restraining order and a complaint was filed, a Las Vegas justice court judge will preside over the case. The judge is supposed to make a ruling based on the evidence presented. In some cases a jury may be used to determine factual issues. The verdict can be acquittal, a fine of a certain amount of money or even a jail term in some cases.

In order to carry out these functions smoothly, the court normally needs several court officials. The officials that you will find in a Las Vegas court of law, besides the judge are court clerks. A clerk is normally assigned to the Justice of peace to help him with the recording of proceedings and other paperwork related to judicial proceedings. In busy justice courts, you may also find a court administrator.